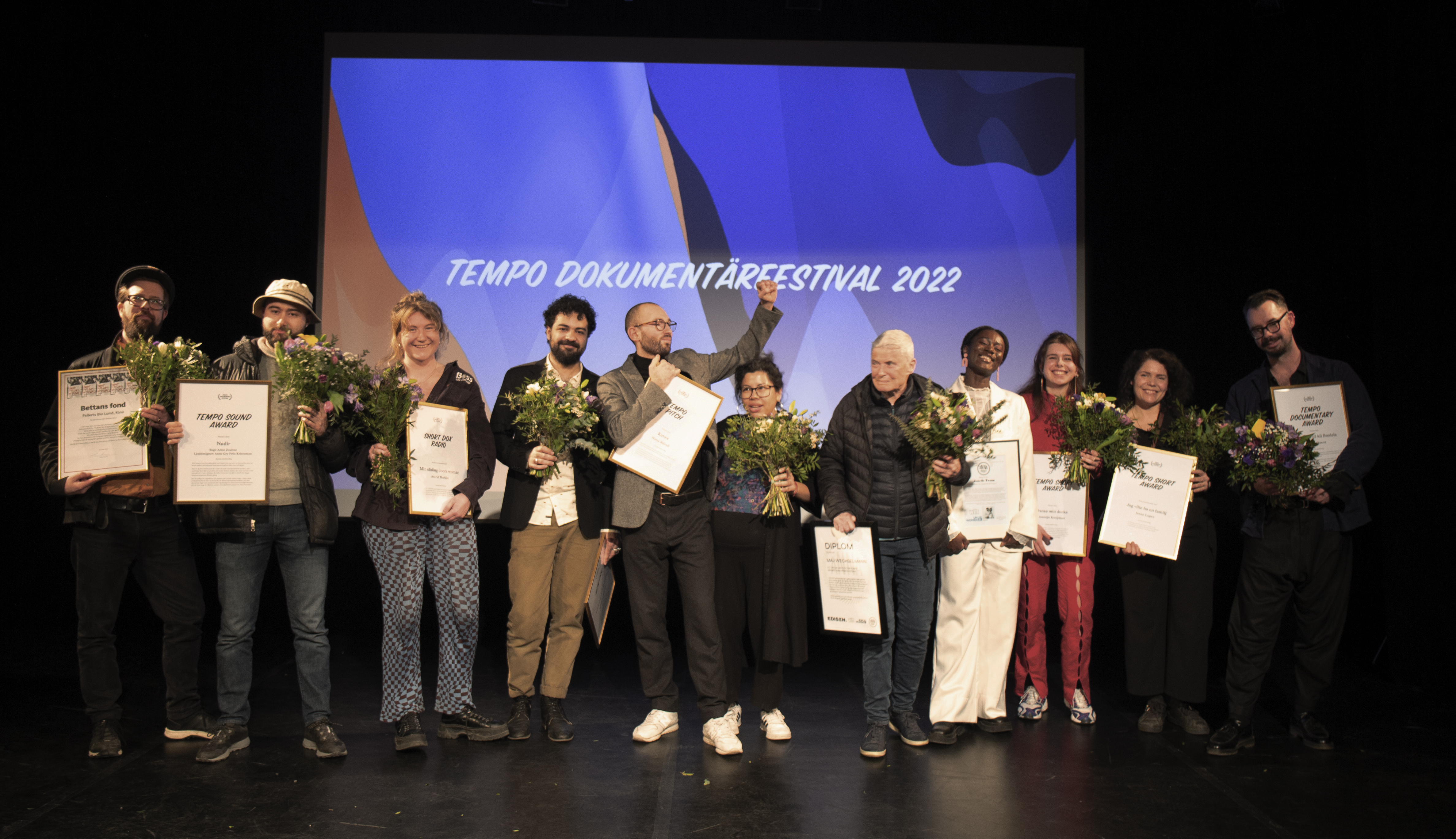 Tempo hosts several competitions in film and radio, both national and international. The prizes are awarded by our partners for the various competitions.

Read more about the competitions and this years winners below.

Stefan Jarl International Documentary Award is named after the Swedish documentary filmmaker, known for legendary documentaries such as Dom kallar oss mods/They Call Us Misfits and Ett anständigt liv/A Respectable Life. The award was established in 2012 with the purpose to highlight the best foreign documentaries from the past year and the winner receives €2 000. The award is presented with support from The Barbro Osher Pro Suecia Foundation.

Honorary Mention
There Will Be No More Night by Éléonore Weber

Tempo Documentary Award is Sweden’s largest documentary film competition where the winning director receives 75 000 SEK. The award is presented with support from the Swedish Film Institute.

Winner
The Scars of Ali Boulala by Max Eriksson

Tempo Short Award is a competition for best Swedish short documentary, where the winning director is awarded 25 000 SEK. The award is presented with support from the Swedish Film Institute.

New Doc is an award for unestablished Swedish filmmakers. The award is given to a promising new documentary film director and consists of 40 000 SEK from regional film bodies Filmbasen/Film Stockholm, Film i Dalarna, Film i Öst, Film Västernorrland, FilmCloud/Förvaltningen för kulturutveckling, Filmregion Sydost and Kultur i Halland - Film.

The Tempo Sound Award was introduced in 2019. It is distributed to the short film, among the competition films in the Tempo Short Award, which has the most thoughtful and creative sound image. The prize consists of 60 000 SEK for use in Momento Studio, equivalent to approximately two weeks in the studio with sound designer.

In the Short Dox Radio competition, ten three-minute radio documentaries compete for the prize of 5 000 SEK. The winning entry may also participate in the Nordic shortdox competition which takes place in Denmark later this spring. New since 2019 is an upgrade of the prize in collaboration with the production company Munck, which offers studio time and a producer to the winner’s next audio documentary. The award was established by Bengt Bok, a professor of radio production at the Stockholm Academy of Dramatic Arts.

Tempo Pitch is a competition where film directors and producers present their new projects in front of a jury and audience. The award consists of 90 000 SEK to be invested in the project. Tempo Pitch is arranged in collaboration with, and financed by, SVT Dokumentär, The Swedish Film Institute and Film Capital Stockholm.

Ina Holmqvist is a documentary film director and producer based in Stockholm. Her films have been shown on e.g. Berlinale, Idfa, Vison du Réel and Hot Docs and her latest film Målbrottskören (co-directed by Martina Carlstedt) were sold to The New Yorker. Together with the filmmakers Maria Fredriksson & Martina Carlstedt, she runs the company Ballad Film, where she produced documentaries like Miraklet i Gullspång (directed by Maria Fredriksson) and Kvinna på gränsen (directed by Ellen Fiske). Ina has also run Dokumentärfilmskolan at Öland Folk High School and worked as an editor at SVT Kortfilm

Gediminas Andriukaitis is a lawyer by training. He established the international human rights documentary film festival INCONVENIENT FILMS in 2007 and has been the director of the festival ever since, expanding the scope of activities into distribution, co-production of documentaries and establishment of educational VOD platform for schools. In addition to running the film organisation, Gediminas has been active in the field of human rights as a long-term member of the Lithuanian Centre for Human Rights, contributing to a number of human rights related projects and activities.

Malin Erixon is a director, producer and animator. Her previous films have been shown at film festivals around the world - for example at the Sundance Film Festival, the Ottawa International Animation Festival and the Nordic Panorama - as well as at arenas such as the Studio at the Moderna Museet in Stockholm and Liljevalchs Vårsalong. She has several nominations and awards behind her, including nominations for Startsladden at the Gothenburg Film Festival, the 1 KM film scholarship at the Stockholm Film Festival and Guldbaggen. In 2020, her documentary series "SÄLLSKAPET - interviews from the center of everything" won an honorable mention at Tempo.

Stina Dabrowski is a journalist and former professor of television production at Stockholm University of the Arts. She has been active as a television journalist since 1982 and has won many awards, including the Swedish Great Journalist Award and Kristallens honorary award.

Johar Bendjelloul is a journalist at Swedish Radio and host of the Swedish political interview program called Lördagsintervjun.
He is also the founder of the Malik Foundation, which awards documentary film scholarships in memory of his brother Malik Bendjelloul, who won an Oscar in 2013 for Searching for Sugarman.

Uje Brandelius is a musician, actor and radio journalist. After many years as the front man in his pop band Doktor Kosmos, he staged the autobiographical monologue performance "Spring, Uje, spring" in 2016. It was about Uje's Parkinson's diagnosis and was played in theaters around Sweden for several years. In 2020, the film with the same name as the show premiered. Uje starred in the film and his family played themselves. The film received three Guldbaggar: best film, best screenplay and best leading role. In parallel with his cultural career, Uje has worked for many years for Swedish Radio, most recently as host of the program "Känsligt läge" in P1 and as a recurring participant in "Tankar för dagen"

Daniella Mir has for a number of years freelanced within various roles in the film industry. Among other things, as a short film controller & project manager at the Film Institute, project manager at Folkets Bio and Film i Väst. Daniella has previously been responsible for the short film competition New Doc and Tempo Short Award at the Tempo Documentary Festival.

Malin Lindqvist is a film photographer and has, among other things, photographed En Mammas Kropp, Tjejtoan 4-ever and the guldbagge-nominated Bad Lesbian. In the spring of 2021, she graduated from Stockholm University of the Arts and has since worked with both documentary and fictional processes.

Svante Tidholm is, among other things, a producer, project manager and filmmaker. He has been active as a documentary filmmaker, runs his own company Två Träd, where he recently produced the short film Josef, which premiered at Göteborgs Film Festival 2022. He is also responsible for the film section at Way Out West and project manager at the film festival Södra Sthlm Filmfest.

Jonelle Twun is a director, pedagogue and cultural producer active in Malmö. Her awarded short film En mammas kropp received an honorable mention during Tempo Dokumentaryfestival 2021 and has attracted attention internationally and in Sweden. She is currently working on her second movie.

Rahma Omar(born 1989) is a poet and scriptwriter based in Stockholm.

Lia Hietala was born 1993 in Stockholm, Sweden. Lia Hietala has her main base in Stockholm but her first short film If I Say No (2016) is financed and takes place in Norway. The film later awarded her the Nordnorsk Film Center's scholarship Springbett, which resulted in her second short film My Gay Sister (2017). The film became very successful, in February 2017 it won the world's most prestigious queer film prize: the Teddy Award for best short film, at the Berlin International Film Festival. Hietala continues to work with both fiction and documentary. Her first feature film Always Amber premiered at Berlinale and opened the Tempo Documentary Festival in 2017 and has since screened at over 50 festivals. Night Shift (2022) is her latest short film also screening at this year's Tempo Documentary Festival in the Short Doc section.

Sara Rüster:Festival manager for the international launch of Swedish documentary film in the Swedish Filminstitut.